THE BOOK WE CALL 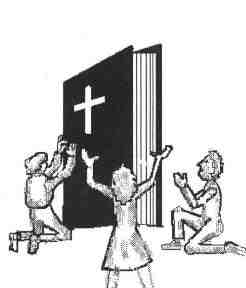 To question the holiness, infallibility, accuracy, and contents of the Bible should not be viewed as denying the existence of God or the Christian faith! To question its validity, focusing primarily on the New Testament, is doing nothing more than that which all of Christianity did prior to final canonization in 397 A.D.. Christianity existed and flourished without an agreed upon text prior to this time.

The Bible has proven to be a source of encouragement, strength, comfort and inspiration to its readers. This is not denied! However, there are parts of the Bible that it is hard to believe have brought about encouragement, strength, comfort and inspiration. On the other hand, men and organizations have used the Bible as a source of creating creeds and doctrines in order to obtain (1) a following (2) power (3) money (4) and fame (building their own Tower of Babel). To form creeds and doctrines and then impose them on other Christians is wrong - very wrong! Rather than uniting Christians, creeds and doctrines have a long history of separating Christians and even dividing families.

At last count there were over 33,800 denominations. At the rate of investigating one denomination per day an individual would have to spend over 93 years in order to investigate all of them.

Tucked ever so discreetly within the pages of the earliest acknowledged church history book, authored by Eusebius (260 A D. - 340 A.D.), THE HISTORY OF THE CHURCH from Christ to Constantine, written between 303 A.D.- 327 A.D.), is the following much overlooked 2nd century admonition given by Apelles to Rhodo. Eusebius, not known as a proponent of Apelles' views, viewed this admonition, given almost two centuries prior by a so called heretic, of such important significance that he took time to insert it in his book on early church history from Christ to Constantine (Eusebius, The History of the Church, Book.V (13-15):

"The old man Apelles, in a discussion with me, was shown to be guilty of many erroneous statements. He therefore began to suggest that it was far better not to argue about doctrine at all, and for each man to stick to his own beliefs: those who placed their hopes in the Crucified would be saved, he declared, so long as they continued in good works."

The following verses seem to support his view:

"But the anointing which you have received from Him abides in you, and you do not need that anyone teach you"

"But the Helper, the Holy Spirit, whom the Father will send in My name, He will teach you all things"

"And do not be called teachers, for One is your Teacher, the Christ"

In his younger days Apelles had felt compelled to convert other Christians to his way of thinking. Time, increased knowledge and the influence of his close friend and associate, Marcion, had evidently caused him to change his mind. Historians agree that together, Apelles, Marcion and a multitude of other like-minded Christians presented the first major threat to the development of the Roman Catholic Church.

HOW RELIABLE IS OUR BIBLE?

Several years ago, while visiting in Los Angeles, California I was introduced to a Catholic professor. In one of our conversations the subject of the Bible came up. I mentioned to him that there appeared to be some errors in it. I didn't realize at the time but I had evidently touched upon a sensitive nerve.

Upon my return to Arizona I received a package in the mail from him. It contained a 6 cassette tape series on the Catholic teaching entitled "CAN YOU TRUST THE BIBLE" by Scott Hahn.

PLEASE READ THE FOLLOWING IN ITS ENTIRETY IF YOU HAVE A PROBLEM IN PLACING YOUR FULL TRUST IN THE ROMAN CATHOLIC CHURCH FOR YOUR SPIRITUAL LIFE!

On the front cover of the package containing the 6 cassette tapes is printed the following:

CAN YOU TRUST THE ROMAN CATHOLIC CHURCH?

No matter how you answer this question, the truth is, we all have trusted the Roman Catholic Church for the formation and preservation of the Bible!

"Irenaeus (c.130 - c.200) was bishop of Lyons (177/178-c.200), theologian and antiheretical writer. Claimed by both Roman Catholics and Protestants as their progenitor, Irenaeus framed the catholic concept of authority". (Encyclopedia On Religion - page 280)

"The Bible - The first beginnings of this process (canonization can be discerned as early as Irenaeus, c.180." (The Oxford Illustrated History of the Church - page 30)

Just how reliable is Irenaeus?

A) Irenaeus claimed to have been the student of Polycarp who had been a student of John. Historians have generally accepted his claim.

B) Irenaeus taught Jesus ministered for 20 years and He was over 50 when He died.

D) Irenaeus taught the resurrection of the body.

E) Irenaeus wrote that Papias was a student of the Apostle John. Eusebius refutes this in his book "History of the Church". (300 A.D.)

F) Although there were many different Gospels circulating at the time, Irenaeus claimed the accepted number be limited to four. This was based upon his belief that there were only four winds.

G) Historians (Roman Catholic Church) bestowed on him the high honor of being called "Church Father".

1. Have you ever wondered why Jesus never left us any writings? He obviously could write! What was He doing until the age of 30?

2. Have you ever wondered why Jesus' disciples never felt the need to compile a book?

4. Did you know that the person that is credited with the idea of forming a New Testament was branded a heretic (Marcion 70-150 A.D.) and believed that all of the New Testament writings were either bogus or had been tampered with? To focus on the negative statements made about Marcion is to give credibility to his enemies or those who just repeated what his enemies had said about him. For instance, Tertullian wrote five books against Marcion even though Tertullian did not know Marcion who had been dead for over 50 years at the time Tertullian wrote. During his lifetime Tertullian changed his position many times and it is also possible that he had a change of heart regarding Marcion before he died.

This can also be said of others, such as Origen and even Irenaeus, who wrote against Marcion.

5. However, since the question was raised on the validity and reliability of scripture prior to 140 A.D., the accuracy of every verse of every New Testament letter would have to be proven to exist prior to 140 A.D.. Yet, even if this could be done, -which it can't,- it is impossible to conclude Marcion wrong and a quoted scripture valid without the original autographs. The "shell game", a game of diversion, has been played upon the masses by the pro ponents of the infallibility of scripture by quoting someone after 140 A.D.

A few years ago I met with a local Greek Orthodox priest. During the course of our conversation he confessed church history was not his thing, nor had he had any past interest in knowing how the Bible developed. He further confessed that most likely his congregation believed he was well educated in both.

A short time later I was asked by an elderly lifelong dedicated Catholic to meet with a prominent Jesuit priest. This lifelong dedicated Catholic almost fell to the floor when she heard this Jesuit priest admit he did not have a clue on how the Bible had developed, was not a student of church history and could not recommend any local Catholic priest that was. (She died a short time later. I've wondered if this shocking revelation and disappointment had contributed to her demise.)

Is it expecting too much from those who impose creeds and doctrines, which are based on questionable scriptures, to prove that these scriptures existed in the original writings before they impose them?

From all indications 100% of all imposers are guilty of "placing the cart before the horse"!

Left unchecked, the blind and the leaders of the blind will continue their current course of imposing creeds and doctrines that result in the splitting up of families and the Body of Christ!

Years ago, when I was young, I placed my trust and confidence in others to do My homework. It has taken almost a lifetime to realize My big mistake!.....Who has done YOUR homework? Accept the responsibility and challenge now!.......Don't be a pawn, puppet, or parrot! Do your own homework CAREFULLY!

If I am wrong, PLEASE, show me the evidence!

P.S.- ON THE LIGHTER SIDE - Please do not respond by saying, "you have to have faith". Faith and ignorance were never meant to be defined the same. Then again, some people do not know the difference. All other responses are welcome.

ON THE MORE SERIOUS SIDE - Place your faith in God and not the Roman Catholic Church or any of its daughters. CONTINUE TO READ THE BIBLE AND BE BLESSED BY IT! However, please, do not impose your interpretation and understanding (creeds and doctrines) on other Christians.